Cote Hair products are all gluten-free (and always will be), but why? 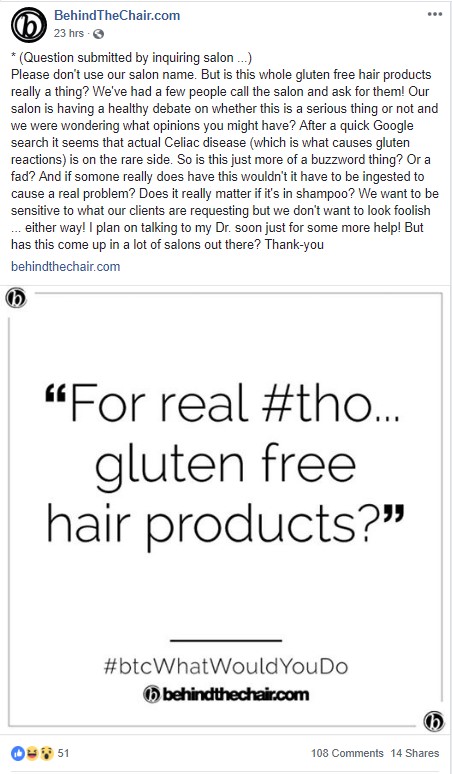 Yesterday, Behind The Chair posted a series of questions on Facebook on behalf of a salon questioning if gluten-free hair care is just a fad. The post received over 100 comments in the first 24 hours, overwhelmingly in support of gluten-free products, which is awesome because for those who are gluten intolerant, the problem is very real!

You have clients in your chair every day that may be experiencing symptoms of gluten intolerance and not even know it. It’s scary! You don’t want to be the one responsible for them having a reaction because you used a product containing gluten.

Based on the fact that the questions Behind The Chair presented even have to be asked, I want to make sure to address three common myths about gluten-free haircare that you may be wondering about.

Let’s get this one out of the way early...

NO! Gluten-free haircare is NOT just a fad. Celiac disease and gluten intolerance have been around for a while. They just didn’t become “mainstream” until gluten-free diets became a thing.

According to the University of Chicago, “the average length of time it takes for a symptomatic person to be diagnosed with celiac disease in the US is four years; this type of delay dramatically increases an individual’s risk of developing autoimmune disorders, neurological problems, osteoporosis and even cancer.”

During that four years (and for life), it’s important to help people reduce the risk of developing the additional disorders by ensuring you use gluten-free haircare products on your clients who are potentially at risk.

MYTH #2 - Gluten has to be ingested for people to react to it, so haircare products don’t affect them.

While it’s true that gluten has to enter the digestive tract of someone suffering from celiac disease to cause damage, there are also people with a skin disorder called Dermatitis Herpetiformis, an autoimmune gluten-intolerance disease linked with celiac disease (Gallagher). Dermatitis Herpetiformis can result in itchy skin blisters, so it’s natural that people with gluten intolerances will be cautious about what products touch their skin, including shampoo and conditioner.

Something else to consider is that while we don’t intentionally eat shampoo or conditioner, that doesn’t mean some of it is not accidentally being ingested anyway.

Cynthia Kupper, executive director of the Gluten Intolerance Group of North America explained to Supermarket News, “If you think about children washing their hair, they're always getting shampoo in their mouth,” so shampoo can actually be ingested on accident. This doesn’t just apply to small children either. How many adults also get shower water in their mouths?

Granted, it is less likely when you’re washing a client’s hair in a salon, but this is an important reason to remain cautious when recommending products containing gluten while selling retail.

The data from the University of Chicago helps put in perspective how many people are actually impacted by gluten intolerance and celiac disease:

That means there are MILLIONS of people in U.S. living with celiac disease. With numbers that large, don’t you want to make sure you’re being safe with the haircare products you’re using?

An even scarier fact is that 97% of those with celiac disease remain undiagnosed, so asking your client “Do you have a gluten intolerance?” isn’t going to be enough. It’s highly likely you have clients that DO have a sensitivity to gluten and don’t even know it.

Blisters on her scalp?! ICK!

At the end of the day, it’s best to just revisit the old adage we all learned as kids, “Better safe than sorry.”

Whether you’re a stylist, salon owner, or a consumer, you never know who has celiac disease or any other gluten intolerance, so why risk it?